The following content was submitted by visitors to Steve's website. Steve carefully reviews all of his email and loves hearing from his friends back on Earth.
Nasa and Cornell

Marvin the Martin, the famous Warner Brothers cartoon character, recently shared his thoughts about Steve and the Phoenix mission to Mars. "When I heard about Steve's latest accomplishments," said Marvin, I just had to leave my imaginary cartoon world and celebrate with my feline friends."

Although the kitty festivities became quite frisky due to an abundance of catnip, all agreed that the Martian rock named "Steve the Cat" is a fitting tribute to cats worldwide.

Marvin's colleague, Sylvester the Cat, could not be reached for comment. However, Sylvester's pal Tweety exclaimed, "I tawt I taw a puddy tat? I did, I did see a puddy tat on Mars!"

Cornell and Nasa make their home in Buffalo New York with PSIP Facilitator Marilou Bebak. Cornell is the "armchair astronomer" of the duo, while Nasa is a bit spacey. They graciously allow Marilou to live with them and pet them and feed them.

The Grade 2 class at Conestoga Public School was introduced to the story of Steve the Cat and his trip to the red planet in order to excite them about the Canadian contribution to the the Phoenix Lander - the weather station. It was decided to submit Steve's first reports and observations as a writing assignment. 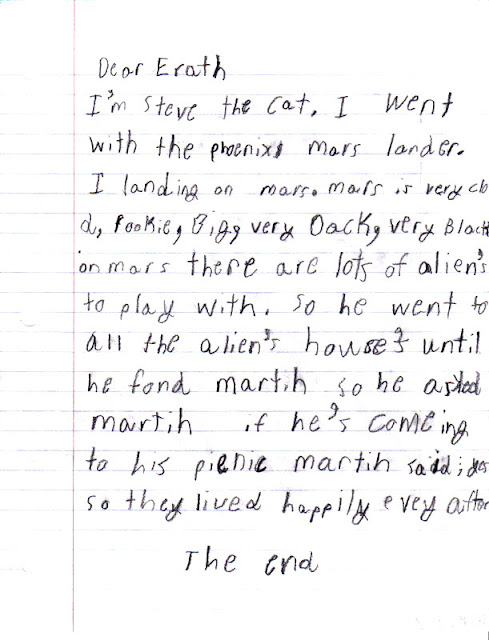 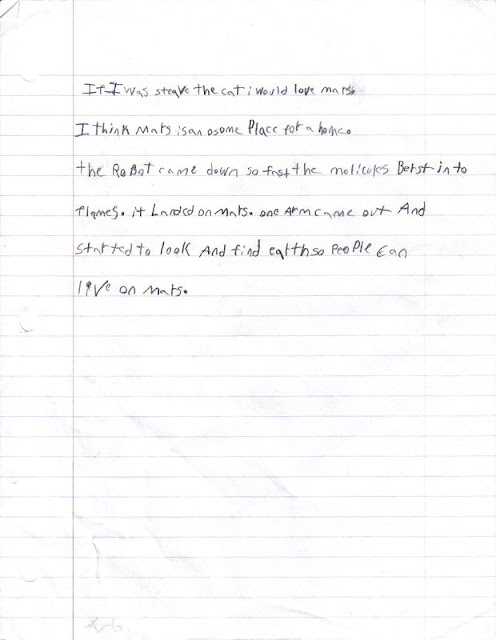 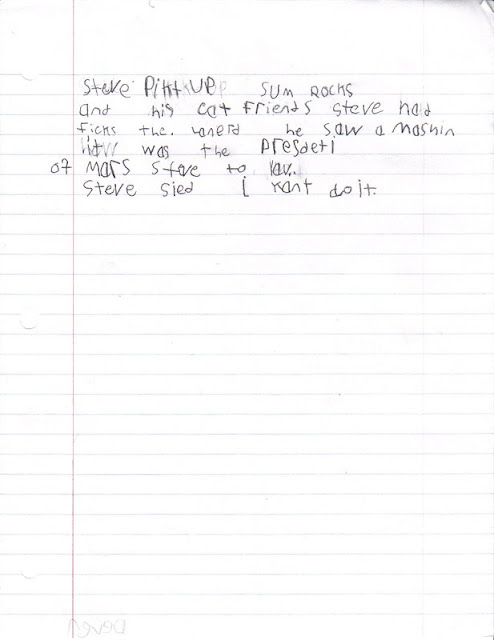 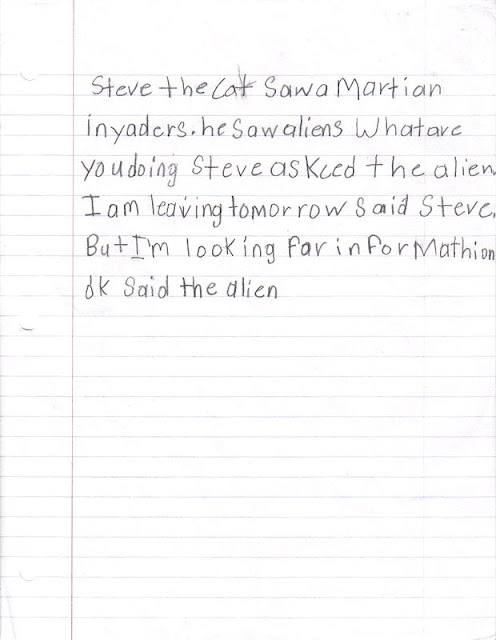 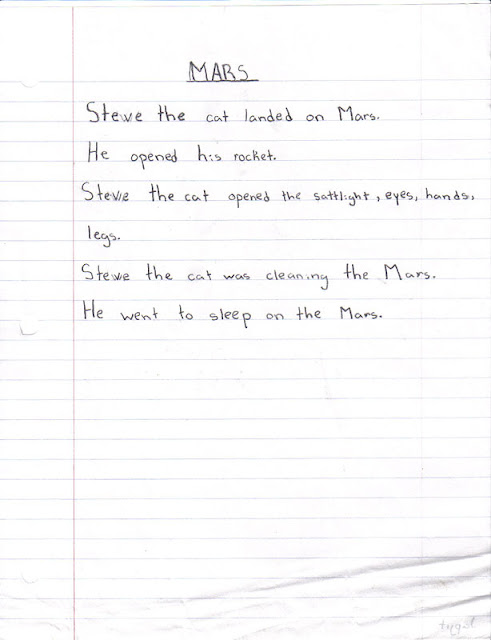 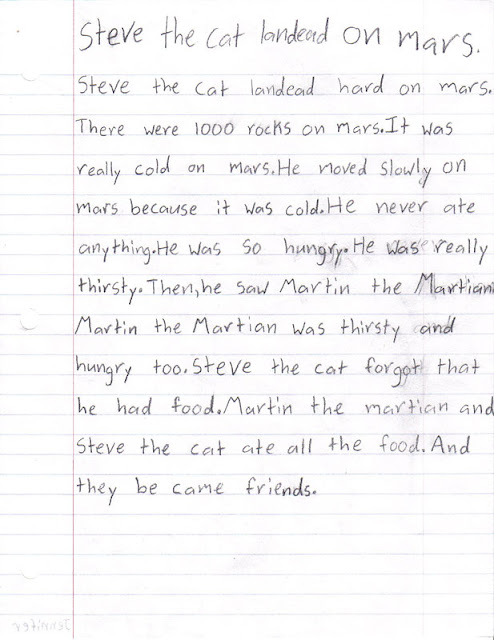 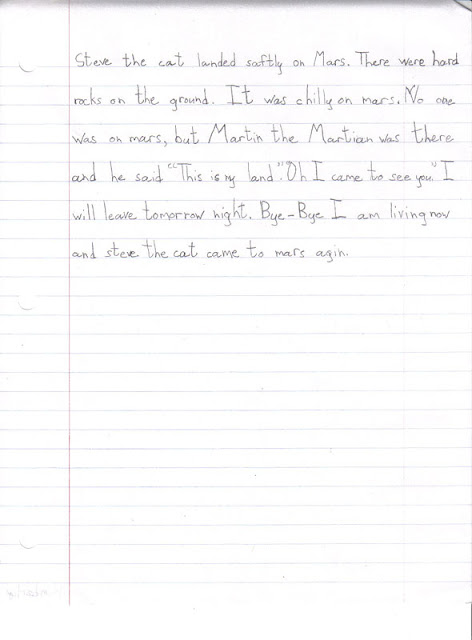 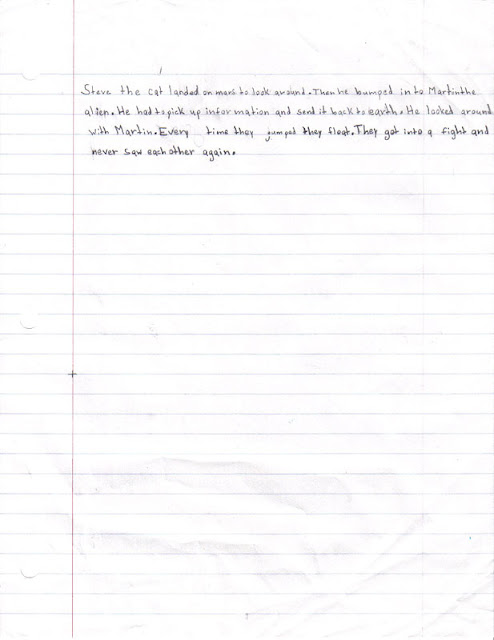 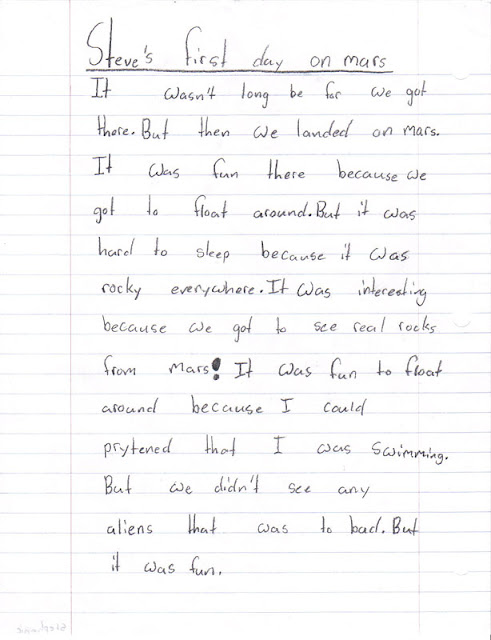 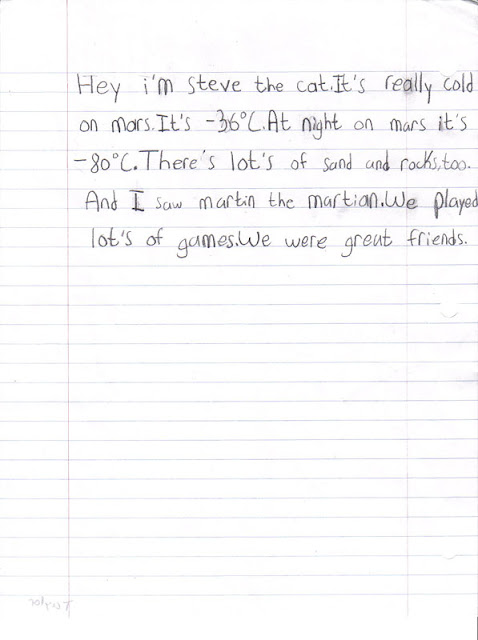 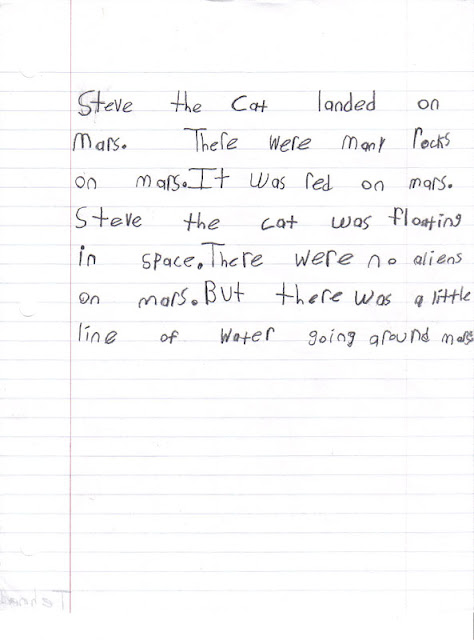 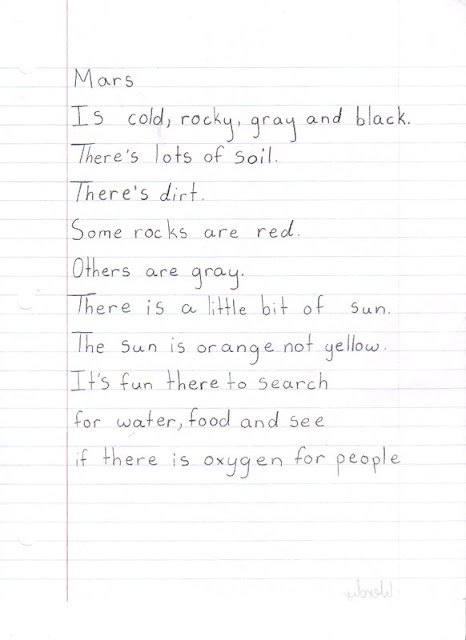 I am very impressed with your adventures in space in the Phoenix. Where do you live and did your interest in space science start as a kitten? Are your humans supportive? 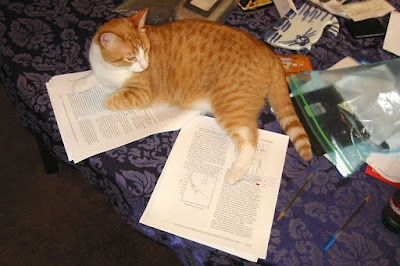 Steve replies: "I live in Moab, Utah, which is located near Arches National Park. The red rock landscape of Arches National Park looks a lot like Mars, which is one of the reasons I love living near it. I also like the fields of wild catnip that grow along the Colorado River north of town."

Steve had a very intense interest in space, at a very early age. Many of the cats in this part of the country remember young Steve's historic speech when he stated, "I believe that this nation should commit itself, before this decade is out." He quickly added that once all the humans were committed, it would be up to cats to get to Mars.

Once Steve explained the importance of his desire to reach for the stars - twice - it began to dawn on his humans that he might actually be serious. Since that time, they have done their level best to help him attain the right stuff, which seems to include an awful lot of catnip mice.
Clovis

Clovis wishes Steve all the best on his exploration of Mars.

...I am a nearly nearly 17 year old Persian cat (named Emma) and have been 'flying' NASA spacecraft to the planets,comets and asteroids for many years along with my late tabby cat sister - Manda (who sadly died in January 2007 from cancer).

...Both me and Manda have flown to Mars before on several earlier missions and we have been on Stardust and on the comet mission.

A suggestion to Steve for his first words from Mars: “Catdu barrada nicto!”

I've got to believe that Steve must trace his lineage straight back to Toonces. Remember? "Toonces, the driving cat, the cat who could drive a car....well, but not very well." I've got Toonces' antics all on tape from those classic SNL episodes! What do you think? Is Steve related?

Steve replies: "No relation. Although Toonces was a pioneer in ground transportation, Toones in a rocket could have started a global war!"

Hope you get home from Mars soon, when do you expect to come back? Is that your twin back here on planet earth? If you find any cats on Mars please bring one back for me. My cat Scooter passed away at age 18 and I miss him. Good Luck!!

Steve replies: "I'll be leaving to come back to Earth in early November. I can't wait to see my buddy Dakota, who has been taking care of my humans in my absense."

Hey Steve - Was just woundering how you are going to get home. I will understand if you take a little while to reply to this message since it will take at least 15min to reach you at the speed of light. Thanks

I was looking for something interesting on the Phoenix Lander to put on our 'message board' at school. I googled and there you were! Now everyone knows you... I think you should go for President.. there is still time!! Why stop at space.. rule the world.. it would be purrrrrrrrrrrfect!

Way to go Steve. Salute from Koko in Moab.